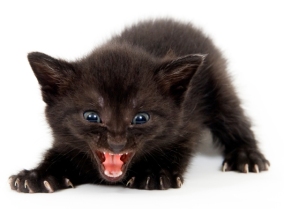 The kitten jumped high in the air, paws pouncing down on its find. He grasped the object in both teeth, tossing it up into the air. A swipe brought it back down again before it could even land, or run away and escape him.

He held it tight within his clutches, head bowed low, growling fiercely at his big brother who walked passed without a second glance or care for whatever the kitten had found. It tried to get away from him. He let it. For a little while. He toyed with it, chasing it to the end of the room and back. It would never get away from him. It was his.

Fangs protruded from beneath the kitten’s upper lips, biting down ferociously. He shook his prey from side to side, crunching down on its hard exterior. The red liquid oozed across the carpet.

“Kizmet!” came a shriek, as his human looked on in horror, hurrying frantically to retrieve the ruined red pen from the clutches of her feline companion.