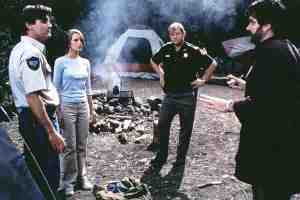 I’ve seen these films so many times I could practically recite their scripts!  Yet, often they get slated by critics for one reason or another.  We all have our guilty pleasures, so I thought this week I would share mine with you.  Comment and tell me what your guilty pleasures are (in film that is!  Naughty!).

What’s not to love about Lake Placid?  It’s hilarious and scary all in the same movie.  Critics often say that it doesn’t know what it’s trying to be, whether horror or comedy.  It has been claimed that the actors haven’t a clue how to say their lines or react because they don’t know if they should be humorous or scared.  Rubbish!  They know fine well that it’s supposed to be a comedy horror.  There are a couple of bits that’ll have you jumping out your seat, but overall it’s a highly entertaining and funny film.

The movie is about a 30-foot man-eating crocodile in New England.  The opening credits are very Jaws-like, as is the opening scene.  In fact, there are several scenes that are reminiscent of the shark movie.  It’s definitely a nod to Spielberg.   It’s set in Maine, which is possibly a nod to Stephen King as well.

There are also an abundance of great one-liners from Oliver Platt, Brendan Gleeson (Argh!  I didn’t recognise him as Hamish from Braveheart until today!) and a foul-mouthed Betty White.

Lake Placid is definitely one of my top guilty pleasures.  I don’t care what anyone says!  It’s a cracker. 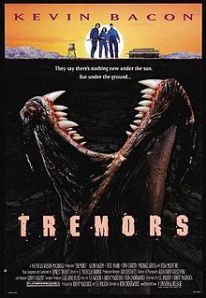 I haven’t seen this on TV for a few years.  Mind you, I don’t have a TV!  Nevertheless, every time I saw this was on, I just had to tune in and watch.  It’s the kind of film that’s normally on around 1am, and you can just zone out and watch without thinking too much.  There’s a lot of humour in it and a chance to see a young Kevin Bacon dressed as a cowboy.  My favourite part is the pole-vaulting scene!

This film is a science fiction horror comedy, which has a lot of humour and has emerged as a cult classic.  Despite not being successful at the box office, Tremors has continued to appeal to many and became a hit through TV, video and internet viewers.

Tremors is about giant underground worms.  If you’ve not seen it, that probably doesn’t sound hugely appealing, but trust me and check it out!

I remember a few years ago, when I was setting out to do a post graduate in film and television studies.  We were asked to write down what we considered to be the best film of all time.  This is such a difficult thing to do.  I pondered on the problem for hours.  It very much depends on your experience of movies, and whether or not you’ve been shown what is considered to be a “quality” movie, by supposed experts.  You also have to take into consideration that not everyone likes every genre.  There were so many great films I had yet to see: Metropolis, Citizen Kane etc.  Besides, there are all sorts of things to consider such as when a film is set and the impact it has on the audience of that time.  The Exorcist had a huge impact on its original audience in 1973.   I also have a fair bit of respect for both the writer, William Peter Blatty and the director, William Friedkin (the nutter!), having also watched the making of the film.  On a small budget, he used many original ideas for special FX and sound.

Still, I was left with one of my classmates responses ringing in my ears: “Brave choice….”.   Diplomatic code for “Are you mental by any chance?” There are, of course, better.   I agree.  By today’s standard The Exorcist is by no means top of the range, but I still think it’s one of the best and original films made.  I never tire of watching it.  Years later it still provides timeless entertainment of human fears of the unknown, and epitomises the good vs evil/religious horror sub- genre.

Conveniently missing out the Exorcist II (don’t!), I also loved Exorcist III – some pretty spooky stuff going on.  I’ve already mentioned it in a previous blog, so won’t elaborate too much.  Despite, George C Scott getting nominated for a Golden Raspberry Award for worst actor – for shame! – Exorcist III still managed to achieve quite a lot of success.  William Peter Blatty won a Saturn Award from the Academy of Science Fiction, Fantasy and Horror Films (USA) for Best Writing.  It also received nominations for Best Supporting Actor (Brad Dourif, as always, was incredible – if my current book ever gets made into a movie I have a part just crying out for him to play!) and Best Horror Film.  Such a shame the disappointing first sequel deterred people from going to see it.  It’s definitely one to watch, if you’re a fan of the original.

Halloween, like all good slashers, is set at a celebratory time of year.  In this case, Hallowe’en – originally Samhain, the pagan feast of the (not particularly evil) dead.  In Christian times the festival became known as Hallowe’en and children would dress up to scare away evil spirits.  In any case, it’s associated with death.

Then we have an almost supernatural-like serial killer, with superhuman strength, who seems to appear and disappear in an instant, killing anyone who has too much sex, smokes or drinks booze.

This is definitely one of my favourite guilty pleasures! 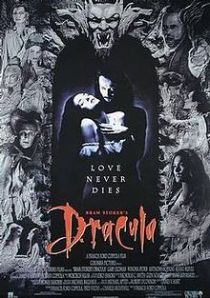 I’m going to be dedicating a blog to this film as it’s actually a HUGE guilty pleasure of mine!

Bram Stoker’s Dracula stands out for me primarily due to the acting of Gary Oldman, Tom Waits and Anthony Hopkins.  The three are all great in their own eccentric way:  Oldman, as Count Dracula, Tom Waits as Renfield and Hopkins as Van Helsing.  I also love the dark, dream-like quality that runs throughout the film.  It’s another movie I never tire of watching.  Francis Ford Coppola used various subtexts and folkloric symbolism, which won me over instantly.   I see something different in it every time I watch.

Until next week, feel free to love what you love.

Remember to leave a comment below and tell me your favourite guilty pleasure!

4 thoughts on “My Guilty Pleasures of Horror: The Monsters I Love to Love”